Ground breaking ceremony for the construction of a Community Literacy Center in Nega-Nega. 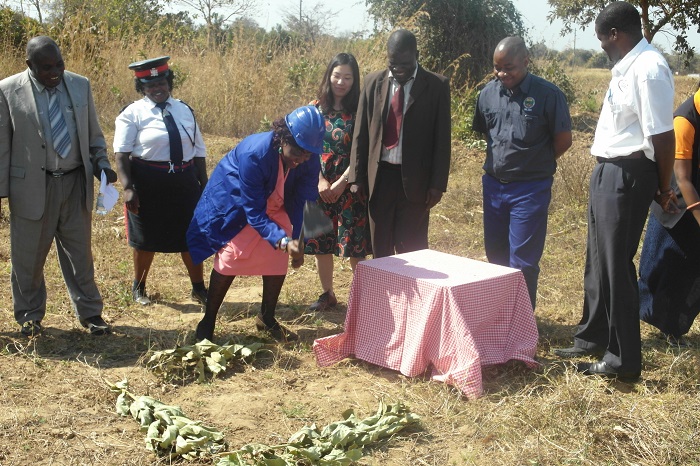 More than 100 People’s Action Forum (PAF) supporters on Thursday, July 29, 2015 celebrated the groundbreaking ceremony for the construction of a 1×2 community learning classroom block for literacy tutors training and life skills education, a project that is being implemented by PAF in partnership with the Korean National Commission for UNESCO (KNCU) under the BRIDGE programme in Nega Nega, Mazabuka district. The Center will sit adjacent to Nega Nega community school and the Florence Mumba Capacity Building and Learning Activity Center (CABLAC).

The project is aimed at imparting literacy and life education skills in the local Adults who will subsequently serve as literacy tutors to the community. The construction works will be conducted by a local Contractor Mr Phanel Zyambo of Zyamco Enterprises who was selected based on his expertise, competence and availability. The project will further engage 22 local coworkers among them Evet Tembo a female metal fabricator who did her junior secondary at Nega Nega community and has participated in various PAF trainings. Upon completion the center is expected to have 11 female and 2 male Adult education facilitators.

After an address by the area counselor who thanked PAF for its continued effort in empowering the people of Nega Nega, Ms Gina Chiwela PAF executive director took to the floor to welcome the Honored guests and all the people that had taken time to attend the event, she then thanked the people of Nega-Nega and office of the District Commissioner for their continued support.

“Adults will empower their children if they themselves are literate”

Ms Chiwela further took time to explain to the audience the importance of adult literacy, mentioning that PAF was currently working with 80 Adult learning groups, she further noted that children were not left out in these efforts saying “Adults will empower their children if they themselves are literate” she stressed that adults that appreciate education are more likely to send their children to school hence the need to empower more Adults. She went on to cite the 41 PAF community schools as some of PAFs commitments to children’s education. In ending Ms Chiwela reminded the audience that it was because of the literacy activities in Mazabuka that PAF won the 2008 world Adult literacy award, hence the need for the people of Mazabuka to stay committed to such programmes.

Ms Hyun the KNCU programmes manager then addressed the audience. “This project is for everyone, we will build this together and it is for every one of you” said Ms Hyun, she gave the initials HOPE saying the project would be carried out in an Holistic manner, with a sense of Ownership and a participatory approach and while Empowering the locals. Ms Hyun ended her speech with a traditional Korean bow saying that she was very grateful for the assistance she had received forthwith and anticipated for more support from both the community and the civic leaders and partners.

After speeches from the ZNCU secretary general and the DODE representative who thanked KNCU and pointed out the value of the literacy center saying the district lacked such a facility, the TEVETA representative announced that internationally recognized certificates of recognition would be awarded to individuals that will work on the project in an effort to empower them, this was treat to much excitement by the audience who cheered as the speaker recommended that the interviewed candidates for construction be picked.

Further the DEBS representative expressed excitement and gratitude at the development. Together with the Mayor the DEBS representative stressed on the need for integrity among the local builder, citing rampant incidents of vandalism and building material theft as acts that should be avoided. Addressing the builders the DEBS representative and the mayor emphasized that the 1×2 classroom building was their own property and should there for be treated as such by insuring smooth running of the project and not steeling building materials. The charismatic DEBs representative added “This Gesture will not be taken lightly, I will ensure a good Job is done”.
“Education is the only weapon to end poverty” Quoting Nelson Mandala the District Commissioner began by stressing the importance of education in national education, she then expressed excitement at the development making a reference that she was an expert in literacy work, joking that will volunteer as one of the facilitators. In addition she thanked KNCU and the Republic of Korea for considering empowering the people of Nega-Nega and further thanked PAF for its continued efforts in provision of Literacy; she later encouraged the women to take advantage of the project at hand and enroll in numbers for literacy classes. Before committing herself as Chief inspector of the project the District commissioner also took time to caution the local workers against Building material theft.

After a vote of thanks from a jubilant local representative, women and men alike stormed the floor dancing and singing “Nga chali BoBo, Nga chali chobotu” while those that could not find room to get to the floor danced and sang from where they stood, this was followed by an interlude song from PAF Director “PAF balange” with the whole audience responding in Unison “Aailanga Aailanga Lelo Aailanga ” a local song that loosely translates as walking the talk or showing ones prowess through deeds, while the earlier song expresses excitement pronouncing that if this was the case it could have been good.

The event which marked the beginning of a project that upon completion is expected have 11 female and 2 male Adult education facilitators was then specially concluded by the initial breaking of the ground by the District commissioner and later sealed by a prayer from the DEBS representative praying for the successful completion of the Project, with a call to a local brew of Chibwantu being made just before the guest could depart.