Investing in Girls and Women’s Education, a key to Sustainable Development!!!

Despite great strides made by different organizations and the international women’s rights movement over the years, women and girls around the world are still married off as children or trafficked into forced labor and sex slavery. They are refused access to education, political participation and other youth activities instead they are trapped into Gender Based Violence. Around the world, deaths related to pregnancy, childbirth and gender based violence are needlessly high, and women including girls are prevented from making deeply personal choices and decisions regarding their private lives. The Human Rights Watch has been working towards the realization of women’s empowerment and gender equality-protecting the rights and improving the lives of women and girls on the ground.

The fact is that education is a primary human right which is fundamental for our ability to exercise and enjoy all our other human rights in general but despite all this, 17 percent of adults across the world cannot read or write and two thirds (493 million) of them are women and girls- a proportion that has not changed much in the past 20 years. Women and girls trying to access education continue to face many barriers and challenges rising from pressure of early marriage and domestic responsibilities to discrimination in the job market leaving them even more vulnerable.

Despite all this, there is firm evidence that educating women and girls does not just empower them but benefits society as a whole as their tremendous contributions help in the development of the country, hence boosting the education of women and girls will help reduce poverty and dependency, promoting economic development and addressing the world’s most urgent challenges such as conflict resolution and health issues.

Girls lagging behind is a global issue! Despite the EU’s firm commitment to equality on the policy side of the problem, there are still underlying societal barriers at the root of gender inequality, for example, only a few girls take science and technology classes in school as those continue to be perceived as “boys subjects”. This, in turn leads to fewer female graduates and fewer women working in areas such as engineering or physics- despite the fact that overall more than half of all new university graduates in the EU are women.

And on the other hand, social care and less challenging jobs such as childcare or nursing are largely feminized making the women feeling less important, valued, recognized and appreciated.

The barriers, which often prevent both women and men from choosing certain jobs, is rooted in discriminatory gender stereotyping about what ‘real’ women or men are supposed to be like. And to this end, the European Parliament, amongest other initiatives, is developing “A new strategy for gender equality post 2015” which proposes actions to be taken by the European Commission and other major actors to achieve gender equality by 2020.
It also aims to extend the discussion on this topic beyond International Women’s Day through a report on “Empowering girls through education in the European Union”,
because equal access to education and equal rights are not just girls and women’s issues or issues that affect only certain countries, they affect both men and women everywhere around the world.

And through the 2017 theme for International Women’s Day (IWD) “Women in the Changing World of Work Planet 50/50 by 2030” which highlights the initiative aimed at raising awareness about the challenges women and girls face rising from difficulties and violations of women’s human rights to work and their rights at work. With gender-discriminatory laws still in existence in many countries worldwide, there is a resulting gender wage gap of 23 percent globally. Women represent 75 percent of informal employment, in low-paid and undervalued jobs that are usually unprotected by labor laws, and lack social protection.

And worldwide only half of the women participate in the labor force compared to three quarters of men, and in most developing countries it is as low as 25 percent. Women spend 2.5 times more time and effort than men on unpaid care work and household responsibilities. All of this results in women taking home 1/10 of the global income, while accounting for 2/3 of global working hours. These inequalities have devastating immediate and long-term negative impacts on women who have a lower lifetime income, have saved less and yet face higher overall retirement and healthcare costs due to a longer life expectancy.

Therefore women’s economic empowerment should be about transforming the world of work, which is still very patriarchal and treats the equal voice, participation and leadership of women as an anomaly, tokenism, compartment and so on, with high chances of contracting diseases like HIV/AIDS due to psychological and social reasons. Further, investing in women and girl’s education is key to national and sustainable development which will later result in attaining the UN Sustainable Development Goal (SDG) number 6 which is aimed at achieving gender equality and empowerment of women and girls by ensuring that they are effective as leaders, economists, or in any field they choose to be.

SDG 6 also aims at eliminating all forms of violence and discrimination against women and girls while Goal number 4 at ensuring quality education for all as 103 million youth worldwide lack basic literacy skills, and more than 60 percent of theme are women and girls. Some women, nevertheless, manage not only to break through these barriers of social and cultural norms and practices but also raise their voices to inform and remind us of the injustices and prejudices other women and girls face particularly in rural areas.

PAF will therefore be bold for change by supporting girl’s education (enrolment and retention) and ensuring that they attain their highest level of education possible because investing in women and girls is not only the right thing to do, but the smart thing to do! Each action taken increases a woman’s and girl’s ability to access equal opportunities which benefits both our communities and country at large.

Lastly as its contribution to attaining SDG#4, PAF, runs a programme that is aimed at promoting the enrolment and retention of girls in school especially the marginalized through school governance and community engagement and enhancing the implementation of the Re-entry Policy.

Let us all join the campaign of empowering women and girls through education and skills and together see to it that by 2030 all the following targets are met and fulfilled.

• By 2030, ensure that all girls and boys complete free, equitable and quality primary and secondary education leading to relevant and Goal-4 effective learning outcomes.
• By 2030, ensure that all girls and boys have access to quality early childhood development, care and pre-primary education so that they are ready for primary education.
• End all forms of discrimination against all women and girls everywhere.
• Eliminate all forms of violence against all women and girls in the public and private spheres, including trafficking and sexual and other types of exploitation.
• Eliminate all harmful practices, such as child, early and forced marriage and female genital mutilation.

“No country can ever truly flourish if it stifles the potential of its women and deprives itself of the contributions of half of its citizens” *Michelle Obama, 2016′(?)

Compiled and written by Lindsay Memory Mwansa.
PAF 2017 .
“Sources”
EU, UN and others. 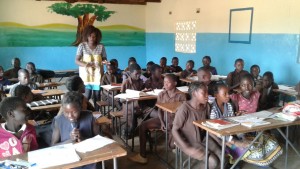